Where does this alphabet come from?

It comes from Ortofasil (version 0) website. Of course, another alphabet could be used.

What are the qualities of this alphabet?

What are the defects of this alphabet?

What would be the ideal phonetic alphabet for the French writing system?

An idea alphabet would require an alphabet having the above qualities without having the defects mentioned above.

What is the main defect of a phonetic writing system for French language?

The mais difficulty is with words having the same pronunciation but having a different orthography. For example, without more information on the context, it's impossible to differenciate so (seau) from so (sot). However, if French orthography can deals with a same written word for cruche (a container) and cruche (a person) , it wil require to do the same with words like so (a container) and so (a person).

What is the pronuciation of reference?

The pronunciation of reference used in our phonetic system is based on the pronunciation suggested by Le Petit Robert.
Local variants are allowed but not used by the tools of this website.

No. In the approach retained here, a word never contains a double consonnant. For example : kolon for colonne, kolin for colline, dezyèmã for deuxièmement.

In the "phonetic" writing system, sign h prevents a liaison when reading the text.

What is letter j̃ used for?

Why not using the International Phonetic Alphabet (IPA)?

What is the mapping with the International Phonetic Alphabet (IPA)?

Most people don't need to read this section, which adds additional information for experts in phonetics

The IPA details many variations of sounds ; some of which are so close that only experts can distinguish them. In order to keep the phonetic alphabet simple, we :

Are there some examples of phonetic writing system ?

Are there other references about a phonetic writing system for French?

Yes: one can look at the book Nouvelle Manière d'écrire, comme on parle en France, written by Gile Vaudelin, which already proposed a phonetic writing system in 1713. 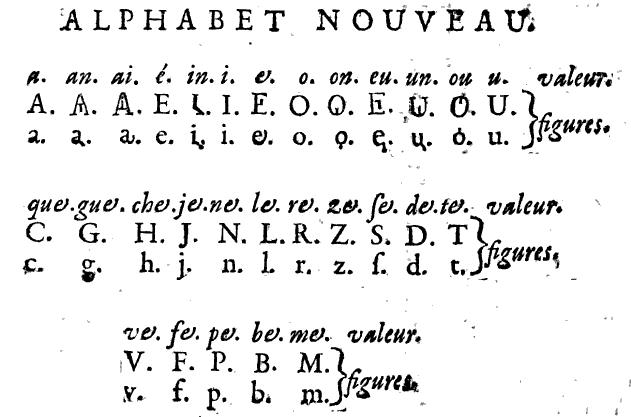